Writing a toy compiler with Go and LLVM

Goal of this post is to take a brief look into LLVM infrastructure and LLVM IR, then use that knowledge to build a toy brainfuck compiler that emits IR which can then further be compiled into native executable by LLVM tools. You can find the full source code in this repository

So what even is LLVM? LLVM Project is a compiler framework and collection of tools which can be used to build programming languages. In fact, LLVM is not a “single” project but is composed of multiple subprojects under the same umbrella which includes LLVM Core, Clang, LLDB, libc++, etc. By the way LLVM doesn’t stands for anything, it’s just LLVM. 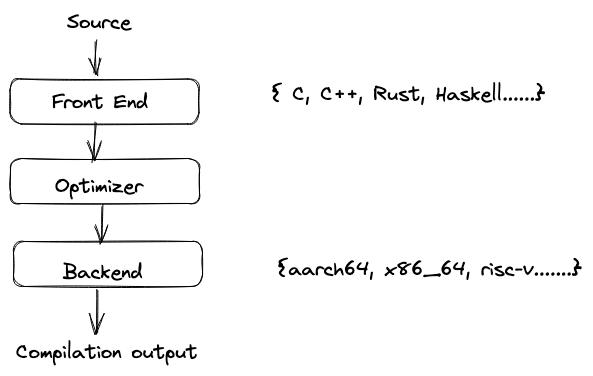 This design has the advantage that each of these steps can be implemented independently of each other. For example, we can write different frontends for different programming languages which all output the same intermediate representation. Optimizer can be designed in such a way that it optimizes only IR which is going to be the same for all the languages. Similarly, backend can be designed to operate on IR as input and output code which is target specific. This way we end up with a really modular design which allows reusing different parts of the compiler for different programming languages without having to start from scratch for every new compiler.

This is how LLVM is designed as well. Frontend parses the source into LLVM IR, IR is fed through optimizer(s) which is then fed into code generator to generate target output. IR is thus the interface to the LLVM compiler framework. This property means that all you need to know to write a front end for LLVM is IR and LLVM tools can then take over to build the final executable.

LLVM IR is a low-level intermediate representation used by the LLVM compiler framework. LLVM has a static single assignment (SSA) form. GCC also has IR called GIMPLE, but it is not easy to work with as it’s more tightly coupled to the compiler implementation. LLVM also has great API(s) available in different programming languages via libraries which makes it a delight to work with.

Let’s take a highly simplified look into how LLVM IR is structured. In general, it takes the following form

Module is the outermost container of the IR. Module contains target information, symbols, global variables, function declarations, function definition and other things (not relevant to current discussion). Most commonly modules are created per source file. Target information is just a long string which describes target the for the IR.

Basic block contains labels, instructions followed by termination instruction. Every basic block must end with a terminator. Terminator cannot appear anywhere else other than at the end of a basic block. These tell where the control of execution should go when it reaches the end of basic block. (most common one is ret)

That looks like C style assembly hybrid and that’s kind of what it is. Let’s try to go through what all this generated code means. There’s a function declaration in first line which tells us datatype this function will be returning, then it’s name square_add (I changed the name from generated output to explain better) and then finally arguments with their specified data types.

This function contains a bunch of instructions to compute values from the given arguments. In this example we see few of them as add, mul, ret, alloca, load, store.

In this example %mul1 = mul nsw i32 %2, %3 is actually the multiplication of two 32-bit integers which is stored in %mul1 virtual register. There can be an unlimited number of these virtual registers unlike any real world CPU. LLVM automatically maps these registers to target registers during IR to object compilation.

Let’s take a look at these instructions

The alloca instruction is used to allocate memory on the stack of the current function, which is then automatically freed when this function returns. This is exactly same as how local variable behave in C like programming languages

This instruction allocates space for a 32-bit signed integer on the stack. The pointer is stored in the register %a.addr.

The store instruction is used to write a value to memory

The load instruction is used to read from memory.

In the example above, we load 32-bit integer from the memory address %b.addr. This value is stored into the register %2.

In this example we add two 32-bit integers in %4 and %5 register and store its result in %add register.

The ret instruction is used to return control flow (and optionally a value) from a function.

In this example, we return a 32-bit integer stored in %add register back to the caller.

Writing a hello world is not too different from what we do in C. First we declare a i8 array of size 12 and initialize it with a value “hello world” with null terminator.

We declare external puts function which will be resolved in linking step when this function will be mapped to c library by the linker.

Then we define the main function which returns an integer very much like our usual C programs. On the first line we use the infamous GEP instruction to get the address to the first byte of our array. Once we get that, we store the pointer in %str register and call the external puts function and return from the function with value 0.

The getelementptr a/k/a GEP instruction is used to get the address of a subelement of an aggregate data structure. It’s like lea instruction in x86 assembly. The first argument is always a type used as the basis for the calculations. The second argument is always a pointer or a vector of pointers, and is the base address to start from. The remaining arguments (if any) are indices that indicate which of the elements of the aggregate object are indexed.

To run this program save the code in hello-world.ll file and compile it with clang

Then finally run the compiled program to see it in action, you should hopefully see hello world get printed out.

Now we can move onto implementing brainfuck compiler

Brainfuck is a programming language which just has 8 instructions. A brainfuck program contains these 8 characters and optionally extra characters which are usually ignored as comments. The instructions are executed one by one starting from the first instruction in the command till the end.

The memory model has a one-dimensional array of 30,000 cells initialized to 0, a data pointer which points to one of the cell as index in this array of cell, instruction pointer, an io stream to read input and write output as a single character.

The eight language commands each consist of a single character:

Since the language is very simple, writing an interpreter is not too difficult. You can find link to my interpreter here. We will be using the design of interpreter to write the compiler

We’ll be using Go to write the compiler using llvm package. To begin, we’ll first create a main function which can read the program source file using command line argument. Then we will declare a LLVM module and try to go through each instruction in our language spec using a switch-case statement. In those cases we’ll implement instruction specific IR code in the following sections and then finally print the module in the string format which is going to print the generated IR to stdout.

But before implementing instructions, we need some boilerplate code in place. We need to declare few function from the C standard library which will be used in this program for input/output and initializing the cell memory as 0.

Once we have these basic functions, we declare the main function for our program, and we add an unnamed block in our source code. This block is where rest of our code will live.

We can now start implementing the language instructions.

To implement + instruction we need to get the cell pointed by data pointer (dataPtr) index, add one to it and then store it back in the array.

This one is the same as + but we just decrement the cell value instead of adding.

This instruction is also very straightforward. We just load the dataPtr into a register, add one to it. Store this new value back in the dataPtr memory location.

This one is same as >, we just decrement the dataPtr by 1 instead.

For [ instruction we need to use a stack to keep track of current loop block (just like in the interpreter implementation). If the current cell is zero we jump to the end of the loop otherwise we jump to the body of the loop.

Note that we’ve created two new blocks to denote body and end of the loop by creating new basic block. We did not name them explicitly (they will be automatically named).

For ] instruction we pop from stack to get the last occurrence of [ instruction because if current cell value is not zero then we have to jump to there. Ofcourse we expect stack to be not empty and if it is empty it means that we have excess number of ] compared to [

This just involves calling getchar() and storing the result in the array at an index pointed by dataptr by GEP instruction.

This covers all the instruction in the language spec. Now we finally add a terminator instruction to end our main function.

As expected, compiled version is orders of magnitude faster than the program ran on interpreter. One interesting thing I observed in the tower of hanoi program was that the optimizer basically ran the whole program at the compile time in the executable it just prints the final state of the towers if compiled with -O3 flag, We cannot even see the disks moving which is a remarkable level of optimization.

I think LLVM is an amazing framework and process of building a compiler with it is straightforward as it can get. Go’s LLVM library is also very ergonomic to work with but many functions just panic instead of returning an error properly which is not very pleasant specially because the most tricky part of writing a good compiler is giving well-formed error messages to the user (wink wink rustc). Apart from this, It was a fun experience to use LLVM.